N.R.A. Gets Results on Gun Laws in One Phone Call With Trump President Trump spent at least 30 minutes on the phone Tuesday with Wayne LaPierre, the chief executive of the National Rifle Association, the latest conversation in an aggressive campaign by gun rights advocates to influence the White House in the weeks since the back-to-back mass shootings in Texas and Ohio.

The call ended the way that Mr. LaPierre had hoped it would: with Mr. Trump espousing N.R.A. talking points in the Oval Office and warning of the radical steps he said Democrats wanted to take in violation of the Second Amendment.

“We have very, very strong background checks right now, but we have sort of missing areas and areas that don’t complete the whole circle,” the president told reporters Tuesday afternoon, adding, “I have to tell you that it’s a mental problem.”

For Mr. Trump, his dealings with Mr. LaPierre and other gun rights advocates in recent weeks have been a reminder that even if his initial instinct after the mass shootings this month was to say he would press for aggressive gun legislation, any such push would be seen as a betrayal of the N.R.A. members who helped elect him.

At the N.R.A.’s annual convention in 2017, Mr. Trump assured the group’s members, “You came through for me, and I am going to come through for you.” And that is what he was doing on his call with Mr. LaPierre, according to two people familiar with their conversation, assuring Mr. LaPierre that even after another round of mass shootings, he was not interested in legislation establishing universal background checks and that his focus would be on the mental health of the gunmen, not their guns.

Mr. Trump — who did most of the talking on the call with Mr. LaPierre, according to those briefed on the conversation — made it clear that he thinks there are ways to scrutinize people’s fitness for gun ownership other than the current proposals. But his latest comments on guns were the strongest sign to date that he is unlikely to make bipartisan gun legislation a priority this fall, when Congress returns from its summer recess. Without his backing, congressional Republicans said, any chance of a bipartisan bill passing the Senate is likely to be dead on arrival.

Instead, the president told Mr. LaPierre that he wanted to focus on mental health and access to juvenile criminal records. Those measures fall far short of the sweeping new restrictions that Democrats sought and that Mr. Trump said he was prepared to endorse in the immediate aftermath of the mass shootings on Aug. 3 and 4 that left more than 30 dead.

The president’s remarks also demonstrated how the N.R.A., which spent $30 million on Mr. Trump’s campaign in 2016 and stuck with him when other Republicans wavered in their support, still wields great influence over the White House, even as its own future is in question. The organization has been mired in investigations into its finances by two attorneys general, in New York and Washington, as well as a legal battle with its former advertising firm and calls from its own board members for change. 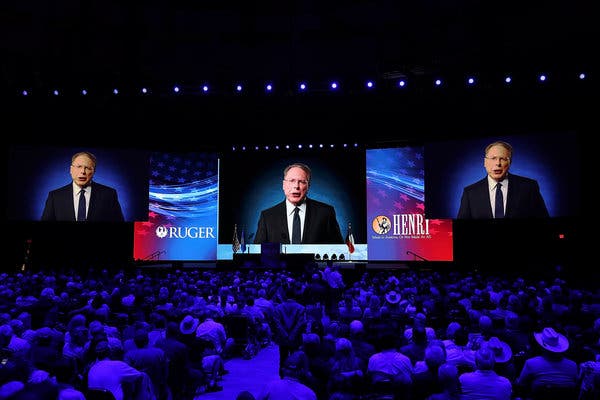 In a statement, Mr. LaPierre expressed satisfaction with the outcome of the call. “I spoke to the president today,” he said. “We discussed the best ways to prevent these types of tragedies. President Trump is a strong 2A President and supports our right to keep and bear arms!”

Aides to Mr. Trump insist that he is still seeking legislative action. But they acknowledge that the president’s definition of background checks is different from the type of universal background checks that Democrats have urged him to pursue. And the type of sweeping bill he is discussing — which at the moment is loosely defined and could contain several different piecemeal proposals — would be viewed warily by a number of Republican senators, as well as Democrats, who would consider it either too much or too little.

The weakening of Mr. Trump’s stated interest in pursuing what he had described this month as “very meaningful background checks” fits a pattern of behavior.

In the past, when Mr. Trump has shown a willingness to compromise on gun legislation after a mass shooting, some West Wing officials have made sure to secure an audience with the president for Mr. LaPierre and Christopher W. Cox, the N.R.A.’s former top lobbyist, who resigned in June. After the February 2018 mass shooting at a high school in Parkland, Fla., in which 17 students and staff members were killed, Mr. Trump expressed support for universal background checks, keeping guns away from mentally ill people and restricting gun sales for some young adults.

The N.R.A. has not been pressing its case alone. Mr. Trump has heard from a wide range of conservative allies who have warned him that he will imperil his re-election chances if he makes a deal with Democrats on guns.

The country’s leading gun group has been embattled this year amid internal fighting, investigations, financial strains and scandal. A revolt against Mr. LaPierre has already led to the departures of the N.R.A.’s president and its top lobbyist, as well as five board members, including the NASCAR team owner Richard Childress, who resigned this week.

Many of those who oppose Mr. LaPierre internally harbor hard-line gun rights views and want him gone before the 2020 election cycle begins in earnest. But the period after the shootings has provided Mr. LaPierre with an opening to show off the N.R.A.’s organizing muscle.

Earlier this month, he said he “opposes any legislation that unfairly infringes upon the rights of law-abiding citizens.” Willes K. Lee, the second vice president of the N.R.A. board and a key ally of Mr. LaPierre, went further, tweeting recently that “Nothing short of disarming America satisfies @democrats. Give them NOTHING,” and even promoting the hashtag “#allguncontrolisracist.”

This year, the House passed its first two significant gun control measures in a quarter century. One of the bills would require background checks at gun shows and on internet sites, where private buyers and sellers can arrange to meet in person to complete a sale. A second bill would increase the waiting period if a potential buyer does not immediately pass a background check, a measure aimed at closing a loophole used by Dylann S. Roof, who killed nine people in 2015 at a church in Charleston, S.C.

Those measures have stalled in the Republican-controlled Senate.

So have the so-called red flag laws, which give the police extra powers to confiscate firearms, and were the subject of a study released this week by researchers at the University of California, Davis, which said that “this urgent, individualized intervention can play a role in efforts to prevent mass shootings.”