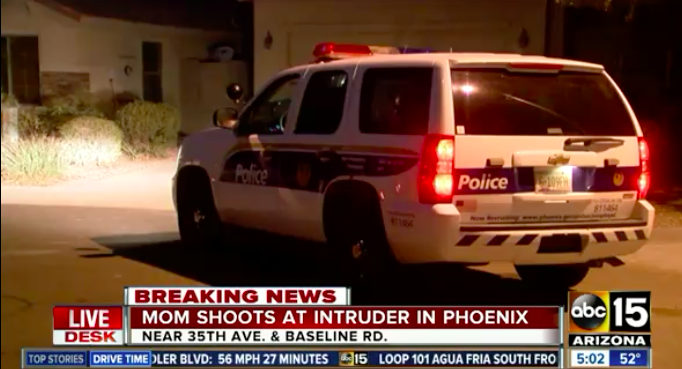 A pregnant mother awoke early this morning to the sound of shattering glass in her Phoenix home. Instead of sitting there hopeless pleading for mercy as Shannon Watts and Moms Demand Action would prefer, she armed herself and opened fire to protect herself and her children.

A woman and child are okay after a suspect attempted to break into their South Phoenix home overnight.

The incident happened just before 2 a.m. on Wednesday in the area of 35th Avenue and Baseline Road.

Police say a woman woke up to the sound of a man breaking into the back window of her home. The woman grabbed a gun and fired in the direction of the man attempting to gain entry.

It does not appear the suspect was hit by the gunfire, and the suspect fled the scene. It was not immediately known if the suspect left the area on foot or in a vehicle.

The harsh truth of this world is that there is no equality in nature. There will always been people who are younger, bigger, stronger, and more ruthless than you are, just as there are those who are going to be smaller, older, more physically delicate, and of a gentler nature.

Firearms are a tool that allows those more vulnerable souls—such as this young mother and her children—the opportunity to defend themselves against human predators. She could not reasonably expect to use a stun gun, chemical spray, impact, weapon or edged-weapon, or even a 911 call to police in this situation without a great risk to herself and her unborn child, not to mention her existing child.

What she needed to keep her children safe was a firearm. The time to call the police was after she had dealt with the threat.

I encourage all parents to take gun safety classes to learn how to treat and store firearms, at least one defensive firearms course on how to use a firearm for family defense, and to obtain a gun safe or gun cabinet with a fast release of some sort so that they can keep a loaded weapon in the home for self-defense at a moment’s notice.

What I do want is good people who are of sound mind and good temperament learn how and why a firearm may benefit their family and keep them safe when used wisely.