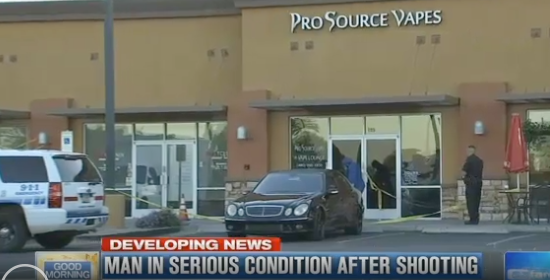 Police have arrested a man after he accidentally shot his co-worker at a Scottsdale shopping center.

It happened between 9 p.m. and 10 p.m. Thursday at Pro Source Vapes located at the shopping center at 15223 N. 87th St., located along Pima Road between Frank Lloyd Wright Boulevard and Raintree Drive.

Eberle and the victim were in the store with other employees, said Watts, most of whom where armed with guns.  They were, “engaging in reckless behavior waving and point their guns at each other,” said Watts.

At some point, Eberle pointed his rifle at the victim’s face and the gun discharged.

The unidentified victim reportedly is in serious but stable condition.

Eberle is being charged with suspicion of aggravated assault and disorderly conduct with a weapon.