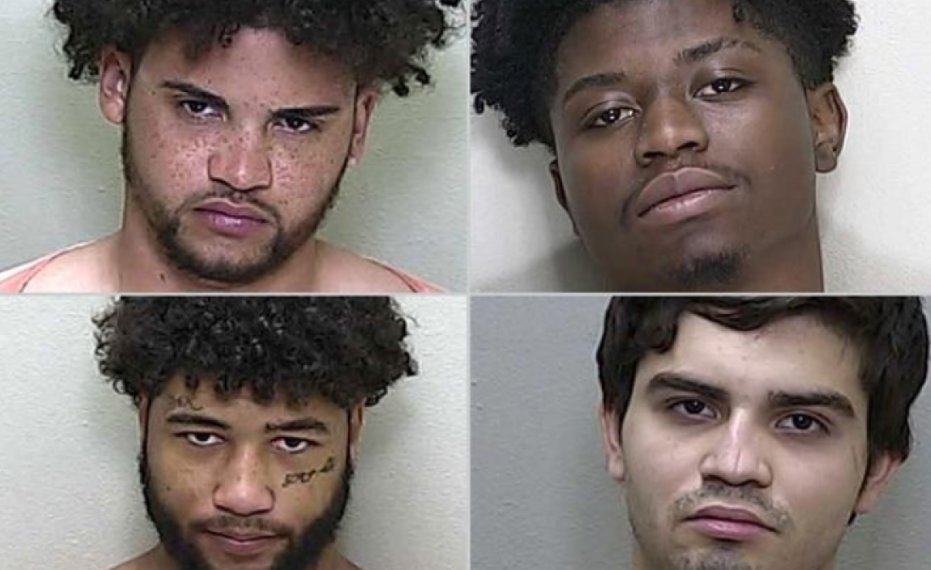 SUMMERFIELD — Marion County sheriff’s officials say a homeowner armed with an AR-15 shot and killed two intruders and was injured himself during a home invasion robbery in Summerfield Wednesday night.

Two other robbery suspects — Robert John Hamilton, 19, of Ocala, and Seth Adam Rodriguez, 22, of Belleview — were detained near the scene, according to the Marion County Sheriff’s Office.

Nigel Doyle, 22, of Summerfield, and Keith Jackson Jr., 21, Ocala, were killed. The homeowner, whose name was not released by the Sheriff’s Office, was in stable condition at a hospital Thursday afternoon.

Sgt. Micah Moore found Doyle with a gunshot wound and a shotgun next to him on the ground. Deputies entered the home and found Jackson dead on the dining room floor. Detectives said he was wearing a “Jason” mask on top of his head, gloves on both hands, jeans and a black shirt.

Near Jackson’s head was a semi-automatic pistol, detectives said.

Continuing into the home, deputies found the 61-year-old homeowner in a bedroom.

He had an AR-15 rifle on his legs and was bleeding from a gunshot wound to the stomach, according to sheriff’s officials. Doyle and the homeowner were transported to Ocala Regional Medical Center, where Doyle died.

Deputies continued to search the area.

Deputy Austin Coon and K-9 Deputy Alberto Gago, with his dog Nitro, found Rodriguez and Hamilton in the 15000 block of Southeast 36th Avenue, according to arrest reports. Rodriguez was hiding in tall grass on the side of the road.

Deputies said the men were sweating.

The mobile home where the shooting occurred is on a 20-acre lot with dense woods and a single-lane dirt driveway. The distance from a gate to home is roughly 300 yards.

Deputies found a Volkswagen parked near the south side of the home. The front doors were open.

Deputies recovered a pump-action shotgun on the ground next to the front porch. They reported smelling a strong odor of marijuana at the home.

The homeowner told Detective Travis O’Cull that, about an hour before the shooting, a male who he barely remembers from a past Craigslist transaction, knocked on the front door, according to sheriff’s officials.

The homeowner said he did not open the door but saw the male peering through a back sliding-glass door. He said he asked the male what he was doing and was told he needed help with his vehicle.

The homeowner said he told the individual he was disabled and couldn’t help him. That person then left and homeowner went to sleep.

The homeowner told the detective he was awakened by a loud noise and grabbed his AR-15, which was near his bed. He saw a masked person inside the home, he said, and he and the intruders exchanged gunfire. He said he shot at the man in the mask and at a second person coming toward him.

The homeowner said it was Jackson who shot him.

They left Doyle’s home in Jackson’s car and went to there, the report states. Rodriguez said Hamilton kicked in the front door and Doyle and Jackson rushed inside. Rodriguez said he heard gunshots from the homeowner.

Rodriguez said Doyle had given him a BB gun at the doorway. He said he ran away and got rid of the weapon.

Hamilton told the detectives he got out of the car before the robbery and walked down the street. He denied being at the scene. After the interviews, both men were arrested.

Detectives secured the crime scene on Wednesday night, and returned to the home on Thursday morning to execute a search warrant on the property. They concluded their search in the afternoon and collected firearms, shell casings and other evidence.

Local court records show two of the four suspects have criminal records. Hamilton was found guilty in 2018 and served time for grand theft.

Doyle was adjudicated guilty in 2017 for DUI and possession of ammunition by a delinquent in 2017.

As for the homeowner, detectives said there are no charges against him and nothing prevents him from owning guns.

Neighbors interviewed by the Star-Banner said he usually keeps to himself and normally says “Hi” when they see him leaving his property.